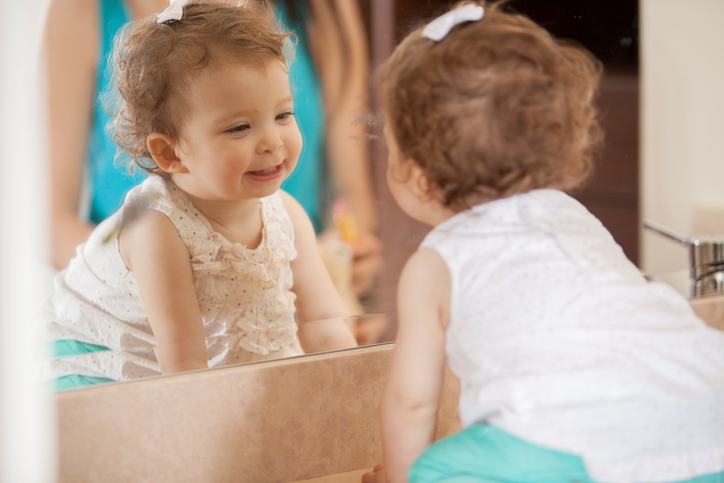 I would like to tell you of a little girl named Angelina. She is six months old. She is the center of attention in her home. She can crawl all over the house, maneuver her walker all over the street. She feeds herself without spilling food (using her hands). She does not sleep at all during the day because there is so much to do and see. She is probably right-handed because every time she is offered a pencil or crayon she reaches for it with her right hand. She cannot walk though she tries it. She does not talk as yet.

Angelina follows her four-year-old brother everywhere. When he is drawing she watches intently, listens intently to his explanations of his drawings. He lets her touch his toys which she does slowly and delibereately. When asked whether she likes something she either shakes her head or laughs meaningfully. There are large magnetic letters and numbers on the ceiling above her bed, as well as large circles of different colors. These are taken down quite often, one by one, and explain ed to her. She loves the attention, laughs and jumps up and down.

When she came home from the hospital everyone made a fuss over her. They took turns holding her and talking to her, touching her, hugging her. She spent each day in a laundry basket dragged from room to room, hauled out to see things and to be nearer someone. If the family had popsicles someone put a tiny drop in her mouth. They kept her so busy that she never had a chance to be sad.

Angelina comes from a bilingual family, so she hears explanations in two languages, very different from one another. Her family members love to talk and have taken turns talking to Angelina since the day she was born. When Mother gets a little tired of it she hands the baby to someone else. Her brother takes charge of the laundry basket in which she has been taken all over the house so she always has company, talkative company, company of someone who is doing something, someone who loves her and belongs to her. Her big sister aged seven also comes in for very much attention. She comes home from school and explains to her brother and Angelina everything that went on there. She sings them the songs she has learned. Angelina listens. This baby does not cry for attention, nor does she seem to want to avoid it. The only time she cries is when some member of the family goes to school or to work, especially her father.

Angelina’s father is now on the night shift so that he can be with his children during the day while their mother is working. Angelina is included in all family activities, all outings, even when they go fishing. Everyone watches out for her and lets her hold the fishing line. I understand that so far she has not caught any fish.

Every waking moment Angelina has personal attention from someone who loves her, hugs her, tells her things, brings her into everything that goes on. The household for now revolves around her. No one seems afraid that she will be spoiled. If she is given any sweets she tries to share them. When her brother fell asleep on the floor she ran for her pacifier (which she keeps in a special place) to put it into his mouth. Everyone laughed. Angelina does not so far put everything into her mouth, she does not get into the other children’s things. She has thrown a number of things about, but that does not seem to bother anyone very much. Her brother and sister are not jealous, they seem to have faint memories of their own similar experiences at this age and want to get in on the act. They like being on both sides, and, after all, it is more blessed to give than to receive.

Angelina probably understands most of what everyone is saying in two languages. Family members keep this in mind and do not say things to distress her. She knows where everything is in her home, she has learned to handle more things than one would think possible. She probably knows most of the letters and sounds, as well as the colors and numbers. We will find out soon when she decides to talk. For now she grins, laughs, tries to sing and dance when she hears music.

Angelina’s parents are truly thrilled with their third child. They feel that having a baby is such a rewarding experience that it is well worth their spending a few years of their lives on her. Her sister is now in a public school class for the gifted. Her brother knows all the states on the map and is working on the countries of the world with his globe. He knows the states so well that he does not have to read the names any more. The older sister checks the food ads in the newspaper, cuts out the coupons for things she likes and calculates the savings of 20 or 30 percent. She makes out the grocery list keeping the aisles of the supermarket in mind to save her mother steps. Both children are adept at using the VCR, have their favorite songs which they play over and over.

I think every day about Angelina and wish that every baby had such an opportunity. Her parents are unique, mostly because they truly appreciate the personality, the humanity, the possibilities of their daughter as well as her cuteness. They don’t seem at all worried that she will misbehave or be spoiled or have any bad qualities at all. It takes a lot of appreciation to raise a child, a lot of listening, a lot of understanding, as well as a lot of love. It does something to and for the parents. In such work we touch the heart of the universe. Is this sacrifice? Is it demeaning?

Most of give lip service to the well-known fact that the capacities of the human mind are unlimited and that early stimulation is important. But most people do not really believe it, and most children are bored. This is the greatest reason for the prevalence of temper tantrums and for most childhood emotional disorders. Angelina and her siblings are indeed unusual, but they need not be.