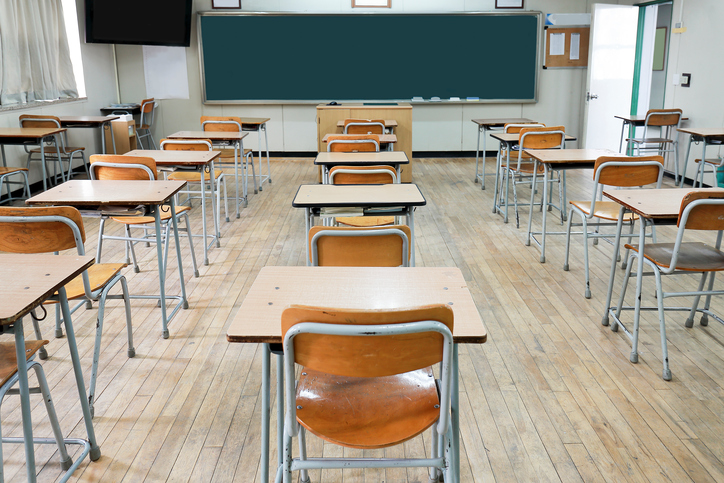 We have had schools for many centuries. Until recently they have been institutions for training scholars and leaders of society. It was not deemed necessary for a farmer to have such an education, nor a woman, for them it was a waste of time. They were needed for the work of the world. Since the time of the French and American Revolutions we have had the ideal of democracy which necessitates an enlightened electorate. It was recognized that it must be the children who would learn to read rather than the adults. The adults were too busy. Besides, the children could be forced to go to school, adults would never be able to stand it.

Schools all over the world begin at about the age of six, since that is the earliest age when children can be forced to sit still, pay attention to the teacher and follow directions. Without such cooperation they could not operate. Unfortunately, it is at a time when the period of greatest sensitivity for language has begun to fade, so that the process of learning to read is more difficult, particularly when they must sit still.

The forced inactivity is very difficult for children. Muscles almost scream to be exercised. It is much harder to control a pencil when you can’t move anything but one hand. Fear of punishment or shame beclouds the mind. Until very recently children were whipped at school. Teachers were proud of their ability to keep discipline. Nowadays corporal punishment is not permitted, much more movement is allowed, but still the teacher is in control of all activities since it is considered that their pupils would not work without the incentives of reward and punishment.

Without schools the percentage of literacy would no doubt be less, the amount of general information would be less. Now that jobs require schooling it is even more necessary to have them available, even compulsory. However, illiterate people are not stupid people. Unschooled farmers may not know much higher mathematics, but they are notably independent thinkers. They have much knowledge of the land and of the crops they grow. They are often extremely philosophic. They have excellent memories.

Most children do not like school. They look forward to recess, weekends, vacations. Since they are eager to learn, one wonders why.

Society values its children, but simply does not understand them. The kindergarten teachers, even though they know better, think of their charges as clean slates having recently arrived at the age when they can learn something. They also think of them as quite lazy, preferring to while away the time rather than study. They do not realize that children have a different kind of mind from adults, that they learn in a different way. The type of adult logical thinking is foreign to them. The idea that some things are more important than others is incomprehensible. The idea that some words or some ideas are easier than others has no meaning at all. So getting good grades in school becomes an exercise in pleasing the teacher. In our conversations we even speak of the teachers “giving” the grades rather than the students earning them.

The teaching of foreign languages is a good example. Everyone knows that they are learned easily by small children, the smaller the child the more easily. However, we begin the study of foreign languages in school at the age of twelve at the earliest. We teach it by giving lists of words to memorize and explaining the logic of the grammar, in other words, by a logical method. We could not possibly do this with small children so schools do not try. Small children learn by listening and deducing the grammar by noticing the various constructions. Very few adults are so adept.

We measure intelligence with IQ tests which measure very well the ability to do school work. If we were to measure them by the standards of child learning the adults would not come out so very well.

The usual classroom method is for the teacher to give an assignment, allot time for the student to study it, then devise a method of measuring whether the students have learned the lesson. Sometimes it is a term paper, a quiz, discussion time or direct questioning, but the students would ordinarily not study the lesson without fear of this. Their actions are constantly under the direction of the teacher, even the time allotted to each subject. Teachers know this, they try to make it palatable by making it seem like play, as that is what children are thought to prefer. The children like easy assignments since they are less stressful, even though they are capable of mastering much more difficult work.

Children are extremely sensitive about their learning. They are well aware of their dependence on adults for information, but they find it burdensome. Figuring out something by themselves gives joy, gives a feeling of elation, more than adults would feel in the same situation. Teenagers lose some of this sensitivity as they progress into the social and emotional world. Here they are most sensitive about human relations, and would resent classes giving information on how to fall in love.

Schools can never reform to meet the needs of children until adults realize the motivations of children and adapt to them. They will never reform until adults change their attitudes toward children. We are poles apart, adults and children, fearing each other, not daring to trust one another, in a state of antagonism. The children always lose. They spend the best years of their lives in thrall. By the time they are in the third grade they will no longer do school work without the threat of losing recess or the hope of pleasing their parents with good grades. Even universities find it necessary to give grades to the students. Not all graduate schools have been able to manage without them.

Teachers and schools are given great power over their charges. A teacher in graduate school can make or break the career of a future scientist. High schools can grant or withhold the diploma without which many avenues of work are closed. The Grade-Point-Average becomes a status symbol. Adult students really care about such things. Children only look at it as another adult anomaly that must be endured.

Preparatory schools as well as universities have reputations to uphold. Graduation from a prestigious school is an open door to much success.

It is interesting to observe some adults who have been educated by tutors at home. They are far less frightened of their lessons. Education is surely not exactly the same as schooling.   It is possible to finish any number of schools and be quite ignorant. All education, in the end, is self education. Schooling can be helpful, teachers can be inspiring, but in the end the student must do the work There is no substitute. Children know this in their hearts.

Children are in a dilemma. They are told that schooling is the path to success, that the good grades they get in the sixth grade will insure it. Most of them believe it and do the best they can, many do as little as possible to get the grades. They know how much their parents will be pleased.   To some it is all a big game.   Some lash out at fate, exhibit aggressive behavior at school. Others retire into themselves and stop caring. The honor students in high school are not usually the most popular. They are called “grinds” because you sacrifice your individuality to get on the honor roll. Colleges know this and require more than good grades for preferential entrance requirements. Some children become obsequious, doing everything they are told, never thinking for themselves. It is too painful.

Almost all adults have at least a few bitter memories of school injustices, denigrations by teachers. Schools do a lot of emotional damage. Those in charge of them mean well, they work hard, but they simply don’t understand.