Chapter 30 – The Rights of Children 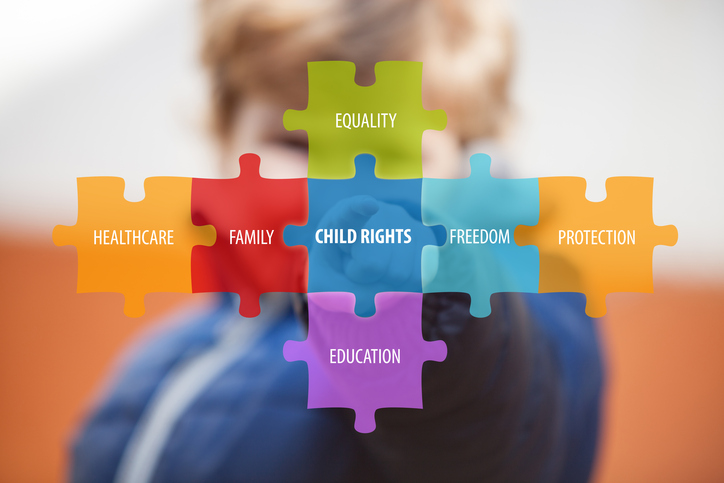 Adults have lots of rights and we encourage each other to insist upon them. We admire those who are willing to suffer in order that they may endure. Do we want children to do this? Today we see freedom of speech as paramount. Do we allow it to children? We applaud when we see freedom of assembly, freedom of religion wrested from repressive governments. We hate seeing punishments without due process of law, except for the children. We feel we have a right to life, liberty and the pursuit of happiness. Children should not interfere with it.

When adults pursue happiness it is usually in terms of self-expression, of an ongoing career, social action of some sort, goals where we change the world just a little, hopefully for the better, at least to make it known that we are here. We order, we organize, we build, we dream, we create, we make a difference.

They have the right to adequate food, clothing and shelter.

They have the right to be part of the family. They resent being thrust into the corner away from everything to “play”. It makes them feel that the adults are the important people while they are merely ornamental. Adults tend to feel that children live a life of paradise where they do not need to work. It is interesting to ask a child of eight or nine years his opinion of a parent. The first reaction is one of love, then as a close second will appear a list of what the parent will “allow” the child to do.

The work of a child is to build up a human being. It takes many sensorial impressions, a complete language, finding out how to be an American, how to be a friend, what is everything made of, what am I capable of, what is going on around here, what people expect me to do. The amount of physical and mental work required is awesome. They attack it with gusto.

Children are partially realistic about their rights. They know very early their need for protection against their own excesses. They scream against fate when they fall down or are not allowed to chew the electric wires, but they do not hold these things against us personally unless we make it personal. Sometimes we tell them they are “bad” when they touch something.

Children have the right to be underfoot, and they do insist upon it. They do not have the right to horn in, but they think they do. They have the right to watch all but our   most intimate activities, to listen to the ways we express ourselves, our banter with family and friends. Often we feel they want us to cater to them, but they really want to use us as patterns. They need lots of time to see many adults in many situations. How else are they going to fit in?

Children have the right to be heard. They have the right to know when, how, and how often. If it isn’t explained to them they can be most unrealistic, monopolizing the conversation, especially if they feel neglected. They are learning to put sentences together and need practice, even if they don’t have much to say. As you listen it will take you back and you will realize a little of what they are up against.

Children have the right to make mistakes. After all, Thomas Edison had several thousand failures before he came up with the electric light bulb. Some people thought him a idiot for his perseverance, but no one scolded him for doing it wrong.

Children have the right to respect. If adults spoke to their friends as they speak to children, they would have fewer friends.

Children have the right to be part of the family, not just houseguests for a few years. Tell them all about your childhood, about your parents and grandparents. It is, of course, permissible to give them a sanitized version. They need to orient themselves, to know where they belong, where they should fit in. They are working to become native Americans, native speakers of English. It takes a lot of practice to get the hang of it, to know all the little nuances. They need to know all the norms before they can appreciate the differences.

Children have the right to move freely in a protected environment, scope enough to learn to handle everything in the home. This, of course, needs to come gradually, and children realize this even as they regret it. By the time they are twelve years old they should be able to be left in charge in case of an emergency. This includes cooking, cleaning, shopping, laundry, simple home repairs. Children feel good about themselves when they feel power over their bodies and over their immediate environment. When they avoid chores it usually means that they have mastered that one and would like to go on to greater responsibilities. They don’t see repetitive activity as discipline.

Children have the right to get in a little trouble that is not life-threatening. No one should have to be “good” at all times. How can you keep out of trouble if you don’t approach the edges of it with caution?

Children have a right to your philosophy of life. Tell them your ideals, your aspirations, your relationship with the cosmos.   It is part of belonging. They probably will not agree with all this later on, but they need to know it so they can use it as a jumping-off place. One small boy was heard to say, “Mother, are we Christians or Presbyterians?”

Children think of these things as rights because Nature is prodding them along. They have only twenty years to build a proper adult, and they have no time to waste. There is a lot that goes into a proper human being, it is not done haphazardly. There is an inner guide taking forms inscrutable to most adults. Mind and body must be exercised, one thing at a time, in proper order. There are thousands of words to learn and to use, one at a time. No other creature takes this long, no other creature has so much to do, no other creature is so adaptable or so creative.

Through the centuries society has not regarded the child as having rights. Nowadays it is presumed that they have a right to life. As far as the state is concerned anyone can become a parent, no license is required. From earliest times the state has washed its hands of children. Now we set up schools which keep them apart from adults. Children remain as beings apart from society.   They are victims without anyone being aware of it.

Today most countries have laws against child labor, but these are widely flouted. School is supposed to help them reach their potential, but in actuality the studies are forced upon them. The school assignments are tedius and exhausting. Society is mainly concerned that the children should learn their lessons quickly so as to save time and money, and be ready for productive jobs as soon as possible.

The State now concerns itself with child health. Actually there is a branch of medicine, pediatrics, specializing in it. Children are inoculated against many diseases which in former times were devastating to them. This is a giant step forward.

Corporal punishment is outlawed in most schools today, but very recently has this been the case. In all schools there is some system of punishment agreed to by parents. In every country children are punished at home in some way. Rough manners, harsh voices, threats are usual behavior towards a child. It seems natural that the adult should have the right to beat or slap a child, whereas such behavior toward another adult would make one call the police.

Parents know these things. They hate to subject the children to all the social customs, but they feel they must. So society abandons the child to the care of his family regardless of the ability of the family to care for him. The family gives up the child to society which shuts him up in school, isolating him from everyone, this child whose greatest need is to be included. Here the child cannot go home until the bell rings, cannot move about or talk to his friends. If he helps a classmate with the work it is considered cheating. All of us appear helpless, and the rights of children are still not recognized.