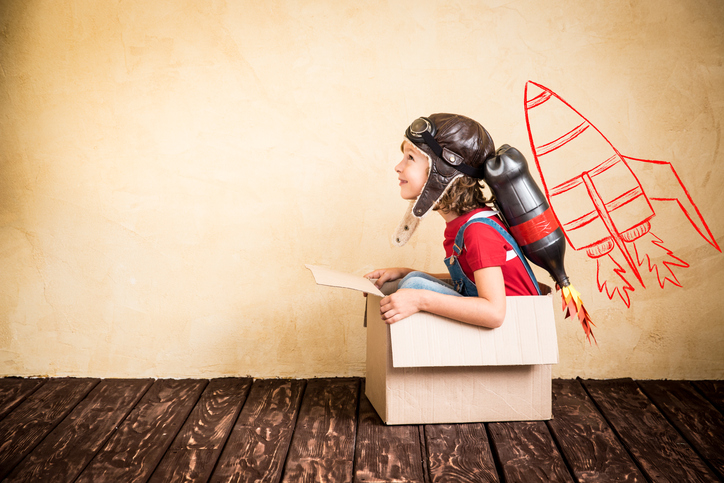 Queequeg was a native of Kokovoko, an island far away to
the west and south. It is not on any map, true places never are.
-Herman Melville

Children seem to be afire with this wonderful faculty. Where would any of us be without it? Everything invented by man is a product of someone’s imagination. This is not only in the arts. Every object in your home existed first in the mind of someone in the past, sometimes in the very far past. When we cook, wash and tidy up we are touching bases with many of them. We do not even know the inventors of knives and forks. How did they come to be?

Putting two and two together is always fascinating. We begin doing this at birth, we sort out things, organize them into categories. We look about, listen, feel everything, taste what we can, then make a mental image of everything there is. We put the world, so to speak, into our minds, then manipulate it all. Our minds can visualize everything we have ever seen, heard, smelled, tasted or touched. When we have it all straight (we hope) we go through the interesting mental activity of rearranging things. When you know what the word “shoe” means, that it is not limited to any one shoe, then you can imagine shoes on giraffes, tiny shoes for your fingers, and so on. You can even find the shape of one in the clouds. There is no end to it.

Children actually engage in this activity more than adults who are busy with the workaday world. Anyway, the adults are sure of what is real and what is in the mind, and have a little control of what goes on in the mind.   Control of the mental processes takes many years, and some of us never make it.

Children are busy every waking hour observing and jumping to conclusions, forming ideas as well as rearranging them to suit themselves. Emotions become tied up with the ideas, making it all the more complicated. We even “see” with our ideas, so that in the case of an accident eyewitnesses will differ on details. Children from the same home will differ in a great many notions. When new observations are made the old notions are so upset that we even tend to resent it. Galileo was even persecuted for disproving the fixed ideas. We form our ideas early in life and cling to them for “dear life”. The model we make of the world is indeed a world of images.

The life of Helen Keller is an inspiration to us all. Her moment of freedom came when her teacher began spelling words into her hand, for at that time she learned that everything had a name. As she grew older, without sight or hearing, she went to the seashore, tasted and felt the water, and imagined the vast expanse of the sea. Even with our senses intact we can see and hear only a fraction of the sea, and must imagine the rest. Most of us have never been to Antarctica, but we have a vivid imagination of it. based on pictures and stories.

Our bodies are geared to do many things that do not require our attention, such as digesting food, breathing, thinking. Our attention is freed up for all the sensations coming in. The eyes are closed only in sleep, the ears we cannot even close, our skin feels all sorts of things such as warmth, air pressure, textures, weight, breezes. Every day of our lives we are bombarded with sensations and we remember in some way every single one of them. They do not come singly to be analyzed, but all bunched up. The things we take for granted are those we have words for to keep them in mind. Someone had to be on hand to give us the words. Many, for which we have no words, we do not think about or even recognize. When we sort out the chaos the words are a cross-reference, as it were. Through them we build up ideas about things.

It is fascinating as well as alarming to watch our children build ideas. Probably the bulk of the work is in place by the time they are seven or eight. They get words from us all day long. Thinking goes on constantly. Present reality gets mixed up with past experience as well as a little wishful thinking.

Children enjoy model cars and model houses. A model car will have wheels, chassis, steering wheel, fenders – the essentials to get the imagination going. There is, of course, no engine, no battery, no exhaust pipe. Children can project their own experiences of cars into the manipulation of this piece of plastic or metal even though the size is unrealistic. They need not know about the inner workings of brakes or transmissions at all. They certainly know these small cars are not real, this at a very early age. This, in itself, shows powerful mental maneuvering.

It is interesting to watch children work with maps. It is not difficult for them to imagine the globe as a model of the earth or the ocean as a great mass of water. Then they see the map of the United States noting, among others, the state of Mississippi. The sound trips well on the tongue so it becomes a favorite. It is an attractive shade of blue and a unique shape which registers on the eyes. The child now “knows” about Mississippi. The next time he hears about Uncle Jim travelling there his ears will prick up with recognition of the name. Next he may hear about the great river, see pictures of it. Then will come words about battles fought there in the past. A basic picture is now in place about Mississippi ready for filling in of more details. This is imaginary Mississippi. Each of us has one, some with more relation to reality than others.

Imagination takes off for the wild places after the age of six, especially when the child has lots of words on which to build, lots of experiences.   Now there is enough basis to imagine Leif Ericson at the prow of the Viking ship getting his first glimpse of America. A child sees himself or herself at his side and can almost feel the wind and the waves. Such children lie in bed listening for the hoofbeats of Paul Revere. They also imagine dragons under the bed and need a nightlight. These older children cringe at getting shots in the clinic whereas the three-year-old marched right up.

There is much controversy over fairy tales, witches, ogres, and even Santa Claus. Children can be afraid of witches even though they have never seen one and know they are not real. Santa Claus is a symbol. He represents something inside of us that delights in giving, in surprising. It takes a lot of experience to feel symbols, that they are just as real as reality itself. Sometime between the ages of six and twelve we come to grips with Santa. Sometimes imagination and reality interweave. We need Santa Claus.

School-age children are strongly addicted to wonder and imagination. Through it they are propelled into the world of facts, every one of which sets them off on fantastic journeys. Space travel leads to the science fiction tales as well as the magic carpets of the Arabian Nights. Teenagers imagine the perfect date, the perfect friend. They also imagine the perfect mouse trap. From these minds come the most wonderful inventions known to man.

Imagination needs the real world as an airstrip from which to take off.