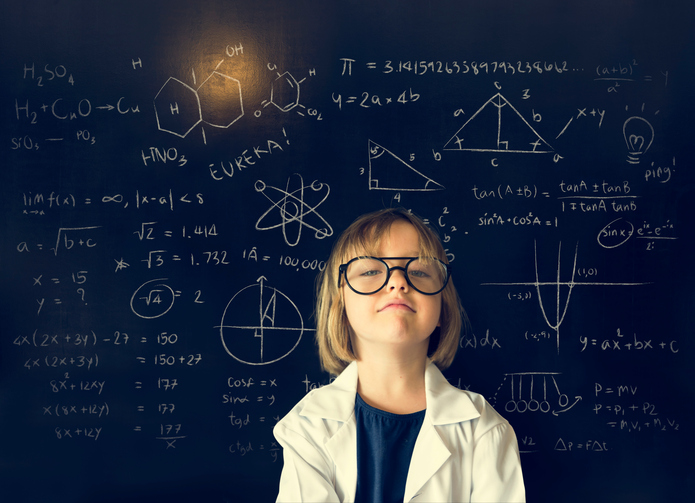 Most parents, when asked whether they would like to have a child genius, would answer, “NO.” They would say that they would prefer to have a well-rounded person than a genius. This reflects the prevailing opinion that a genius is not usually well-rounded, but is a bookish misfit, unable to make friends. The truth is quite the contrary. The genius is usually strong physically, socially and emotionally. It is also assumed that another drawback of the child genius is that he or she is smarter than other people, therefore finds it hard to be one of the crowd. Parents are also frightened by the fact that the child would be smarter than they are.

We all tend to look at childhood through our own rose-colored glasses of memory. We need to be a little realistic, not boggle at facts. All children are smarter than all adults in certain ways. They have more acute hearing, sharper eyes, far better memory, and a greater ability to imitate movements. They take in the environment and analyze it later, whereas the adult takes in only what is “relevant”. The baby at the age of only a few days can distinguish phonemes to an extent completely hopeless for an adult. Piaget tells us that rational thinking kicks in at about the age of 14, so we adults can rest assured that we can outmaneuver children temporarily.

Today’s children begin life at a time in history when outer space is no secret, when airplane travel is routine. They know all about computers, many things completely unknown to their parents at that age. They know things that Leonardo da Vinci never heard of. Are they smarter? Evolution is supposed to be slower than that.

Does genius have anything to do with genetics? If so, why have most of the geniuses of the world been born to very ordinary families? Intelligence tests do not test all forms of intelligence, but mainly the ability to do schoolwork. They do not pretend to test artistic genius, mechanical inventiveness, or even the ability to concentrate. The ability to follow an ideal is not even thought of on these tests.

Differences in performance of human beings are far greater than can possibly be explained by any test. All psychologists will tell you that no one uses more than one-tenth of his potential. If this is so, then there cannot possibly be a test of potential. These differences in performance show up in the first grade, so must have something to do with the preschool years.

Studies of mental retardation all lead to the conclusion that it is not a natural state, but is due to injury or to the lack of some important chemistry. Much of it can be prevented or cured. Therapy seems to include much sensory stimulation.

Intelligence is built up by the activity of the children themselves as they absorb their culture.   They are born psychically incomplete, needing a cultural environment for completion. Connections between eye and brain require things to see, to name and to think about. Human babies need more time than horses and elephants to come to maturity. Intelligence has something to do with it.

Modern research shows these things very clearly. We can now make brain scans showing that new neurons are fired up when new things are seen and heard. In a matter of seconds whole new brain connections are made, lasting for a lifetime. Without proper stimulation unused neurons will disappear. Sensitivity to phonemes is sharpest in the early months. By the age of 18 months or so only the phonemes used in one’s native language remain strong. Abused children who are locked up for years never develop good vocabulary or grammar sense. What can you say about their potential?

One hundred years from now children will be born taking for granted all sorts of new knowledge unknown today, without any increase in potential. Actually human potential is completely unknown as of today.

All the books on parenting are telling you how to train your children so that they are manageable, how to housebreak them, how to get them to quite fighting and grabbing. You get very little help on how to stimulate your child intellectually, even though we all agree that the brain makes humans truly human.

We tend to call learning “academic” as if it had nothing to do with the real world. We carry this prejudice to the point where we do not want our politicians to be too intellectual for fear that they will not be in touch with real people who, of course, are not very intellectual. We do not trust people who use too big words, they seem arrogant.

If this is true, then every child is a potential genius. What happens? Lots of things!!

One thing, usually touted, is “pushing”. Children often are pressured by parents to excel in some area of life, they resist the pressure and, even when they succeed never truly excel. They simply cannot bear to become robots. Sometimes they refuse to perform at all. When a parent urges early piano lessons or early reading this may happen. However, when the child goes to school it always happens. It is one of the great problems of school. Children who learn to read spontaneously enjoy it much more. Most parents, because they have been through school, are unable to present academic subjects without pressure.   They can teach children 26 different kinds of foods, but boggle at 26 simple little letters. Supposedly that requires a professional.

Probably the hardest thing for parents to realize is that, while you can open the doors, the child must choose which doors to pursue and , in the end, do all the work.

Children raised in orphanages where they are given very little stimulation suffer agonies. Many actually die. We are all limited by the amount of stimulation (not pressure) we had in the first two or three years of life. We communicate this to the children wordlessly.

All children are geniuses when they are born, whether you like it or not. You underestimate them only because they cannot talk. I wish some baby would be born talking so that we could have this verified, but even so he would know very little and still be underestimated.

Early learning does not merely give information only, but actually makes the brain grow smarter for all our lives. So give your sons and daughters the whole world even if you do not completely understand it. If you don’t know something, look it up. Show them everything that is good and beautiful to you. Tell them everything you know even if some of it is wrong. They won’t know the difference until they are teenagers anyway, and by that time most of today’s knowledge will be out of date. Let them know how you feel about things, particularly those things you find inspiring. Their potential is limited only by the doors that do not open.