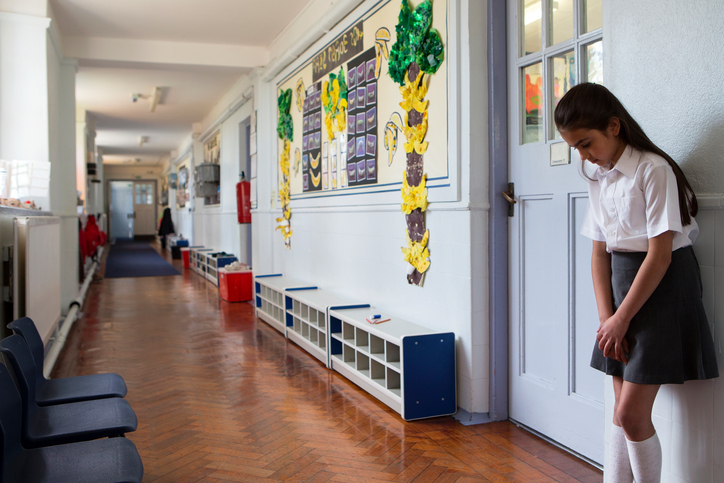 Children, obey your parents! Most books on parenting are manuals on how to get small human beings to obey. Emphasis is always put on what sort of punishment is suitable. If a child exhibits antisocial behavior the parent is always blamed for not insisting on obedience. Parents are expected to teach civilization by commanding and demanding instant and complete obedience. Children are known as good or bad depending upon how well they obey. Disobedient children even think of themselves as bad. We admire dissidence in adults, not in children, at least not at home!

We have plenty of reasons why obedience is a good thing. We think of children as unable to reason so must be ordered about. We think that they would never in the world do the right thing if they were not properly punished. The great fear is that they will get their own way, twist the adults around their little fingers instead of the other way around.

It is thought that obedience teaches good moral values such as honesty, truth, kindness, loyalty and the like. It is also thought that it teaches respect for authority. It is supposed to be good training for the job market, for good citizenship. It assumes that children would never learn any of these things without obeying their parents unquestionably. Only when they reach the age of reason can the parents relax and trust them.

There are many difficulties with this view, because it is not true. The opposite is also not true, that without fear of punishment children will become willful, petulant, dishonest, perhaps end up in jail, certainly never fit into society. The word is “spoiled”, which assumes that the children would be all right except for parental indulgence.

We are afraid of disobedient children. They are likely to walk all over us, be imperious, flout all authority when they grow up. Historically it is believed that this is their true nature, so adults beware! Disobedient children embarrass us before our friends, affecting our social status. Frightful, isn’t it?

One problem is that children tend to imitate their parents. This gets in the way of obedience. If you are ordered around,you will learn to order other people around, or you will learn to be subservient to them. It is not a kind thing to punish someone for unkindness. It is also a great strain on parents to be absolutely just at all times. You are bound to slip up at least once. We are indulgent toward parents, but remember for years any unjust punishment.

It is interesting to note the age at which adults demand obedience. There are a few who spank babies of six months for crying, so great is the fear of children having their own way. This is deplored, yet when the child walks at eight months it is slapped for touching her parents’ belongings. It is assumed that the baby must be taught by punishment. Obedience is needed since that is the only way to civilization, also the only way to teach respect for property rights.

Another interesting fact about obedience is the type of behavior demanded. It usually has to do with the type of behavior feared by the adult, involving for the most part the character faults the adult has deplored in himself or in his family for years. Other types of faults are overlooked. This does not go unnoticed by the average intelligent child. They excuse us for it, but they remember. Older children will discuss it among themselves rather objectively. They learn to deal with adult foibles. In the teenage years it comes out in the open

We need to remember some important characteristics of these small persons:

We all need to be law-abiding, but don’t we really want to be? We like to know what the rules are, especially if they are like the law of gravity which you disobey at your peril.

It is good to know that there is some authority which will uphold the manmade rules fairly. For this we subject ourselves to the will of someone we trust. We like the idea of the rule of law rather than that of absolute despotism.   We want the rules to be consistent so that we know exactly where we stand.

Obedience, like everything else, must be learned. It involves subjecting one’s will to that of another, so it is dangerous to our integrity and not to be done lightly. The highest type of obedience is voluntary, trusting the authority figure implicitly. Fear should have no place in it. The necessity should not be there except for emergencies. Then when a sudden command comes along we can obey with trust.

There are levels of obedience. Sometimes it is impossible. To an active baby, “Keep still” can be an impossible command. Then there is the level of obedience when the child can sometimes obey but not always. Parents who do not understand this become infuriated.   However, we can all remember times when something seemed to take over and we were quite unable to follow all the commands. Children need help in this.   Parents are also in this position. Demands vary with the situation, so they can very easily seem inconsistent.

Children learn to cope with adult demands. When it is difficult they will test the limits. They learn how many times they must ask permission before they get it. They know us too well. Adults should beware of power struggles over some things such as eating, sleeping or toilet training. Ingenuity is required.

We need not be afraid of children. They really do not want to give us a hard time, but sometimes they can’t help it. They want perfection as much as we do. They trust us but need to guard their own integrity. Above all they insist on working on physical and mental skills. If forced to give this up they will exhibit very regressive behavior. They need from the parents a set of boundaries which they understand and can follow, a set of laws which respects as well as restricts. These limits need to be impersonal, and, like the laws of the Medes and the Persians, unalterable.

Trust the children and they will trust you. Forget all about “Lord of the Flies.”