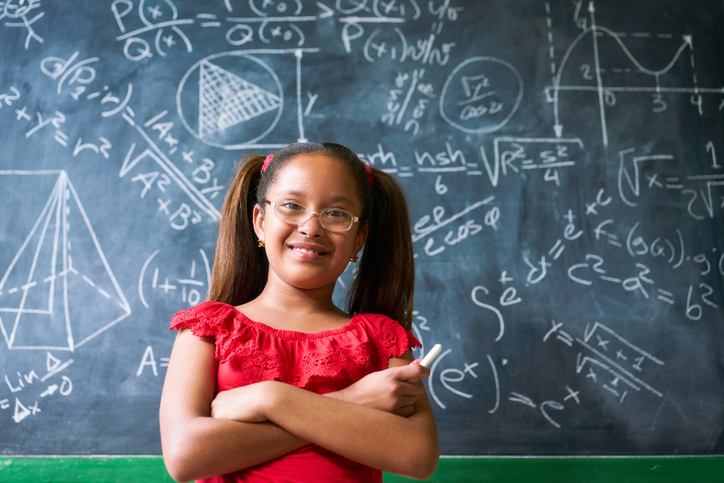 This is for those of you who have a mental block in math, those who never got good grades in school and who have forgotten their multiplication tables and are afraid of computers.

Each of you in this predicament will have a tale to tell of a parent or teacher who pressured ou to memorize addition or multiplication facts which meant nothing at the time. Some sort of punitive activity will be included in your tale, and something grossly unfair. My first admonition to you will be not to mention any of this to your children. In these days of calculators it not necessary to memorize anything really.

Mathematics is actually another form of language, to be acquired at the time of language cquisition, in the first two years of life. One tends to consider it a thing apart from the rest of language because it was taught at a separate period in school and its use was limited to school hours and homework. That takes all the vitality out of it. Language is a thing meant to be used, not learned outside of life. It is to be used for present purposes as well as a foundation for the future. Actually there is no practical need for solving quadratic equations, that is, in the everyday life of the adult, even the mathematician.

The number system is a creation of the human mind, it does not exist apart from human beings. Geometrical forms are mental products. Many natural objects are roundish, but the idea of a circle is something else entirely. It is the epitome of roundness which nothing in nature can attain. Children at a very early age know this. They have seen so many roundish things that they know exactly what is meant by the “circle”, even though they may have never even seen one. They are fascinated by shapes altogether and love to talk about them. After they have the idea, and know the names of some shapes they lose interest and go on to other things. Then in high school when they are not so visually sensitive they find it a chore to learn the vocabulary of geometry.

The number system depends entirely on the idea of oneness, that a unit can be repeated to infinity, any unit you want. We use it to talk about the world. To talk sense is to talk in quantities. It is no use to say that a dog is large, how large? It is no use saying that an atom is small, how small? To talk in quantities brings precision to the mind which craves it in the first place. Precision of thought brings pleasure. It pervades everything. In music the rhythm is the basis of it all. Each tone is an exact number of vibrations in the air.

In the nineteenth century mathematics was supposed to train the mind. After the time of Dewey it was supposed to be of practical help. When I went to school my teachers told me that I must learn addition combinations so that I could check the addition of the grocery clerks. Had I known that adding machines would be in use when I grew up I would never have studied as well. Today mathematics is taught because it is supposed to be important in the business world. Indeed it is, but mostly it is a language meant to better mentally take hold of experience.

Mathematics is also interesting in itself, apart from any uses at all. Mathematicians tell us that it is the closest thing to pure form.

Love of precision is one of the great human tendencies. All of our technical devices tell us this, down to the key that fits exactly into the keyhole. Children and adults alike find exhiliration in it, from the golfer on the putting green down to the baby reaching for the rattle, missing it, trying again, thrilled when he makes it.

At or about two years of age there will be a sense of number of some sort. When asked how many feet he has, the child will perhaps answer “six” but will never say “red”. A baby as young as six months can tell the difference between two and three cookies in your hand, but will not be able to talk about it unless given the words. They use the word “four” as a pigeonhole and apply it to people, cars, cookies or flowers. They need to hear the same word used many times for many different sorts of things. Then they must think very abstractly about the word, something no one can do for them.

Children love to count. It is a real help to the observing mind. They count by rote long before they apply the numbers to objects. When they begin to do this they need adudlt help and example. Parents should count everything they see with delight. Counting actually helps the eyes to focus as they dash about from one flower to another in the vase.  Adults who have counted from an early age are more observant people.

The number sense in children will not grow without being fed. They need to experience numbers, talk about numbers, measure things, make change in the store, watch someone measure a half-cup of water for a recipe, know how tall you are, how much you weigh.

Children have minds that are unbelievably powerful, but they need words, such words as: large, larger, feet, inches, square feet, quarts, gallons, pounds, ounces, miles, miles per hour, cents, dollars, bits, bytes, hours, minutes, and as many as you can think of. These words are not a bit hard to understand, but if you have not heard them you cannot possibly remember precisely what you have seen or heard. These words can be used when you fold the laundry, put away the dishes, turn on the TV, drive the car, walk up the stairs, do the gardening, etc.

Children in some instances are not allowed to count on their fingers! Fingers were made long before computers, pencils or erasers. With the use of fingers the addition and subtraction combinations can be visualized. Number concept grows when children are interested, when they mull over the numbers before they go to sleep.

Parents and teachers worry inordinantly about getting the right answer to arithmetic problems, as if that were important! It is considered that the wrong answer would then be memorized, as if the child were a robot to be programmed. It is the interest that counts, the curiosity. Like any form of language the learning of mathematic is illogical, natural, enjoyable. The right pronunciations, the right answers will eventually emerge without anyone knowing quite how it happened.

Children of five or six will enjoy learning how we write numbers in the decimal system, at seven or eight they will love experimenting with numbers to different bases, including the binary base which underlies computers.

Some children are known as “idiot savants” and can do fantastic calculations in their heads. These children have concentrated on one area of life, but they do demonstrate the power of the infantile mind. Then there are those children who have had no opportunity to think much about numbers until they go to school. These children can indeed develop a number sense but it will be harder. They have dropped stitches and will probably never excel.

When you give children experiences with numbers as friends, you give them powerful tools to explore the world. Just do not do all the exploring for them. Numbers belong to life, they need to fizzle about in young heads, unimpeded.