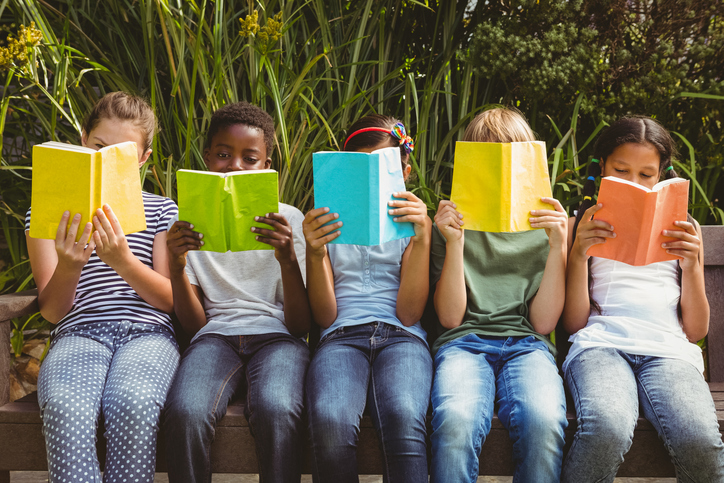 It is a great moment in your life when your child leaves the prison of illiteracy. Spoken language is written on the wind, it can reach only the ear that is nearby. When we can read we can communicate with others far distant in time and space.

When the alphabet was invented by merchants, most scholars refused to use it, saying that if mankind could read and write the memory would atrophy and we would have the appearance of knowledge without knowledge itself. Nothing comes without its price! Most illiterate people have retained fantastic memories.

The American Revolution and the French Revolution declared that men have inalienable rights, that they should take charge of their governments. To do this well a literate electorate is required, so the children were mobilized, as if everyone knew it could not be done by the adults. Children were herded into schools, forced by fear of punishment to learn the alphabet the future advantage of which they could not possibly see. The legacy of this is still with us. Reading and writing are seen as academic, requiring much intelligence, difficult and distasteful in the learning process.

All over the world formal education begins at about six years of age, as at that age children first become amenable to it. In order to learn in school the child must be able to sit still, pay attention to the teacher, and follow directions. This is difficult at any age, impossible before six. However, after six the language sensitivity begins to fade, making reading and writing more difficult. Teachers work very hard, but it is a bit late. Reading and writing can be thought of as part of the whole language process to be mastered while the interest is so high. Teachers in the field of Special Education know that learning to read helps many children who have difficulty with pronunciation and vocabulary.

The letters are the key to written language. They can be seen and heard. If they are cutouts they can be felt. They fit the words like a jigsaw puzzle.   In the early years when children are so keen for new sights and sounds letters are easy to learn. Looking at sounds gives them a new dimension, feeling them helps even more. There are only 26 letters in the English language, not many for the colossal memories of the small ones. When they know the names of 26 people or 26 types of cars adults smile indulgently, but when they know 26 letters the same adults feel that they should dust off the presidential chair.

Learning letters and sounds is not learning to read. It is only an extension of the language process. It is actually a help in learning to talk since the sounds can be studied in isolation.

There are certain basic facts about children that are overlooked:

All that is required to learn the alphabet is for some adult to give names to the funny noises. It should take a week at the outside. Concurrently the adult may purchase a colorful ABC book and show the child what the funny noises look like. Naturally, this should be done with enjoyment, not pressure, without using tests of any sort. It helps to recruit a teenage uncle who will make funny faces to increase the hilarity.

Anyone who tries this will succeed, and often the children will take it from there and pick out the letters in TV ads or street signs. The letters then have some relation to real everyday life. Parents should enjoy the process and not try to introduce Shakespeare at this stage. Then when you say words the funny noises pop out of them delightfully. Knowing their names gives the children a handle on them. This is not reading, but merely an aid to language development.

Between the ages of three and six children perfect their speech until it is nearly as good as ours. They also learn to ride a bike, work the VCR, fold the laundry climb fences, and draw pictures. By the age of six or seven funny noises have lost their appeal, they seem infantile, so our children are bored to extinction in the first grade. Their vocabulary is so rich that the simple words in the primers are no fun at all. This lack of interest makes learning to read a chore. Disillusionment sets in. The teachers do all they can to make a game of it, but it is too late. They try to make the work easy, which does not help at all. Their pupils become extremely adept at evading the lessons. All first-grade teachers are facing an uphill job.

When Sesame Street first opened on TV the education experts were dubious. They thought that it was necessary to reach the mental age of six before it was wise to subject children to the alphabet. Everyone was skeptical, except the children who watched keenly and learned letters and sounds quite happily.

Writing should come before reading. Writing is an analytical process where you know what you want to say. You must listen to your own speech, then put letters to represent it. You set them down in the order in which you heard them.   You have then put your thoughts down where people can see them. Reading is a synthetic process. You must look at the words, take them apart, make the sounds, put the word together, go on to the next word and guess the meaning of the entire sentence. It could come as a surprise.

Reading is far more than sounding out words. Until you can read you can have no idea how it feels, the rhythm of the eyes moving across the page, the delight of sharing the ideas of the author, the excitement of a story. It definitely helps to have had books read to you so that the sounds are there too. Until you can do it by yourself you can never know the feeling of independence where you can communicate on your own time, in your own way. You are in control. It is like having an adult at your beck and call.

Education is too important a job to be left to the experts. What is needed is the knowledge that each adult has two missions in life: that of building his or her own life, and that of helping children to learn when the time is ripe. Everyone, after all, is either a parent or knows someone who is.

It has been shown that when mentally retarded children are given the alphabet at three or four years of age, their speech patterns improve. They also can read and write well before they are six. They may not draw profound conclusions from their reading, but I often do not either.