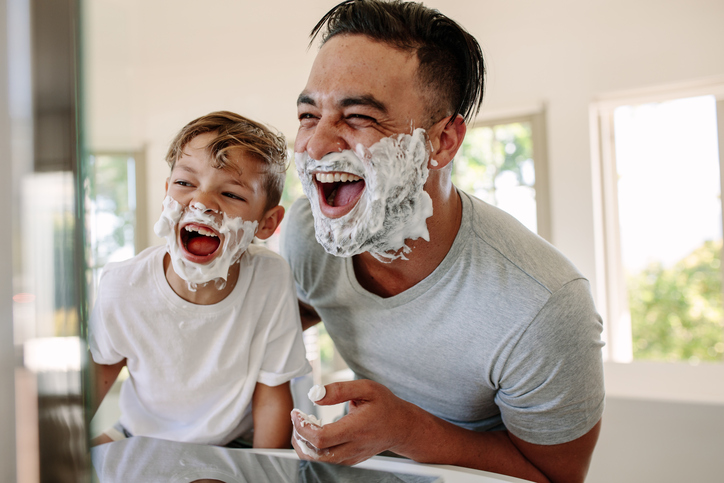 There is indeed a human instinct for imitation. We are all copycats, not only the children. When we go to a foreign country we look at the differences in table manners and try to conform. It is only polite, we say. How else could human race be so adaptable? In Alaska we look about to see how the natives keep warm and try to find just such a jacket. We watch to see what the neighbors are doing and decide whether it is a good idea. We call it learning from each other.

Children are masters of imitation. They have the eye for it, the ear for it they perk up at sounds that I can’t even hear. Just watch a father some day with three small sons walking behind him. They will have the exact same swagger. Children come home from school with all sorts of strange words, some of them unacceptable. They copy the facial expressions of some older child just to try it out. A left-handed child can even imitate the movements of a right-handed parent in reverse, which is not easy. They get the hang of it during the first year. Adults have forgotten how much fun it is to imitate someone’s movements. If we could do it our golf lessons would progress much faster. Actually we could probably do it, but the interest just is not overpowering anymore. We have gone on to other interests but have lost something in the process.

Babies are best at imitation. I read recently that French babies cry in a different tone from German babies, so the process must begin earlier than supposed. They need it to learn to talk and to use their hands. The human hand is tremendously powerful but can do nothing unless under the direction of the mind.   The hand actually cannot develop without practice in imitation. They watch, listen and imitate all the livelong day even when you think they are just vegetating. They imitate facial expressions which involve tiny muscles. That all helps to get their own muscles under control. They are also thinking all the time, and eventually use the facial muscles to express their own thoughts and feelings in a way that other people can understand. They watch the movements of various adults, then try them all out to see what works best for them.

Children are working so hard for perfection in their imitation that they are extremely sensitive on the subject of clumsiness. They feel terrible about making the awful messes that eventually occur, no matter what they may say to cover it up. Criticism at these times can be devastating.

At first we think that all this imitation is cute, but later it becomes overwhelming. Parents find that they must watch their P’s and Q’s as never before. It is gratifying to see our good points in the mirror, but the last thing we want is to see our foibles repeated. Then when the children arrive at the age of three or more and begin the wholesale copying of other children we just don’t know what to think.

It is well to realize that children are not like billiard balls, set in motion by outside forces, propelled by Newton’s laws of motion. Actions of children are moved by inner forces, by self-directed goals. Children do not imitate every activity of every person they see. Much slips by without engaging their interest. Interest will be highest when it has to do with their theme song, “Help me to do it myself.” Children choose what to imitate, for the purpose of becoming independent members of society. The imitation is more of a transmutation than an exact copy.

Imitation is the basis for originality, strange as it may seem. It strengthens the individuality by the conscious and unconscious selections of what to imitate. Children through imitation become aware of their own capacities for a wide variety of actions they would otherwise not have thought of. In this way children grow in awareness of themselves as measured against someone else. Slavish imitation can actually teach us our own abilities. After a bit of this the children put on a few embellishments. In this way imitation and originality are two sides of the same coin. Because of all this imitation the gains of each person become the possession of all of the society.

My sense of myself grows by imitating you, and my sense of you grows in terms of my sense of myself. So the ideas of right and wrong in children tend to be the approval or disapproval of others. It is inevitable, but all this will change after these important roots are laid down. It makes for social cohesion, for social stabilitiy. It gives us a feeling of belonging, a feeling of being American. We salute the flag, saying the words in unison, imitating all the motions.

After a little slavish imitation one wishes to change things a little. After you have copied someone’s behavior you are in a much better position to see the advantages of making your own alterations before you really internalize it.